Our story will seem strange – it looks more like cheap detective stories of a century ago, telling about mysterious criminals, rather than the story of a very real person operating in a European capital in the twenty-first century. But such is the reality – very little is known about the criminal authority Arman Aharonyan, who dug in in Prague.

The fruits of his life had to be restored literally bit by bit. It is known that he is an Armenian, it is known that the field of his activity is the Czech Republic and (at least partially – Slovakia), it is known that he was in conflict with another Armenian criminal, thief in law Andranik Soghoyan. But it is not possible to recreate a more or less harmonious picture of Akharoyan’s life. What is paradoxical for such a large figure, besides doing business in the center of Europe.

Even the surname is given differently by different sources – there is a spelling of both Aharonyan and Aharonyan. Perhaps this is because most researchers draw information about Arman Aharonyan (Aharonyan) from Czech sources, where he is usually referred to as Arman Aharonjan.

Be that as it may, but for the first time the name Akharonyan surfaced precisely in the Czech Republic and precisely in connection with a showdown in the local criminal environment. However, it can be called local with a very big stretch – all the top representatives of the Armenian criminals who got into the case of the investigation of the murder that occurred in 2007 in Prague.

Then, in Vinohrady, Prague, someone shot the driver of the director of the Sazka company, Alyosha Hushak, when the latter drove into the grocery store. At first, the police decided that this was an ordinary criminal showdown – Sazka is a betting company.

However, during the investigation, the killer was caught. It turned out to be Timur Tretyakov, a citizen of Ukraine, during whose interrogations it turned out that there had been a mistake. The victim was supposed to be Arman Akharonyan, about whom Tretyakov was told that he lives in the Vinohrady quarter of the capital and drives a black Bentley.

On November 27, at the indicated place, Tretyakov saw a dark green Bentley, from which a man got out, who actually turned out to be the driver of the Sazka CEO. Tretyakov mistook him for Akharonian and shot the victim three times. Having made a control shot in the head, Tretyakov fled the scene of the murder.

On December 23, 2007, during a special operation, law enforcement officers managed to catch Tretyakov. Tagir Torshoev (a Chechen or Ingush by nationality, according to idnes.cz). He, as it turned out later, was an informant for the Czech special services.

As a result of the actions of the police, the name of the one whom Tretyakov was supposed to kill was revealed. At the same time, the name of the customer and the reason for the assassination were revealed. The customer was the Armenian thief in law Andranik Sogoyan, better known by the nickname Zap or Zapa. And the reason for the assassination was that Arman Akharonyan refused to make a contribution to the so-called “common fund” in the amount of half a million dollars. For what exactly he had to contribute such money is unknown, it is only known that after Akharonyan received the “last Chinese warning” from Zap, he did give the money.

The “warning” consisted in the fact that on November 13, 2007, in the center of Prague, on Vaclav Square, the same Tretyakov stabbed Khachatur Gharibyan (one of Akharonyan’s close associates), whose life, however, the doctors managed to save. However, paying off the debt did not help Akharonyan – Sogoyan ordered him to be killed anyway. “Order” got to Tretyakov, who eventually shot a completely innocent person.

The investigation and the trial lasted a long time, their course in itself is interesting – as a result, the connections of some of the defendants in the investigation with the Czech special services surfaced in the case, Sogoyan fled to Armenia, where he ended up free, and Tretyakov will receive 22 years in prison.

But this is a separate story, which practically does not shed any light on the mystery of the identity of the planned assassination victim – Arman Akharonyan. It makes no sense to retell it – a lot was written about the ups and downs of the Sogoyan case, including Russian-language sources. However, another key defendant in this case, Arman Akharonyan, was for some reason mentioned in passing in all these materials.

Although the identity of the victim (albeit a failed one) of such a high-profile criminal showdown, which eventually led to tension between the Czech Republic, Slovakia (the defendants appeared in this country as well) and Armenia, should have interested the investigators. After all, why should Akharonyan “unfasten” 500,000 dollars into the common fund for something? And if he refused, did he feel some kind of strength behind him? But when examining the materials of the case of the attempt on his life, a strong impression is created that someone is diligently diverting the interest of both the investigation and the public from him.

As a result, the case calmed down – the last mention of it was in 2017, when the Supreme Court of Chechnya overturned the verdict in absentia (18 years in prison) of the Prague court to another thief in law – Gilani Aliyev, who was convicted along with Andranik Sogoyan. The surname Akharonyan flashed here only in passing – it was necessary to somehow explain why Aliyev was tried in the Czech Republic.

It seemed that the scandal had finally subsided, and a lot of time had passed since then. But unexpectedly, the name of Akharoyan resurfaced in connection with another scandal. This time it was not about the murders, but about the muddy story with the construction of a casino and a poker tournament with a prize fund of 88 million euros, which was supposed to take place in the suburbs of Prague – Rudna – in 2020: 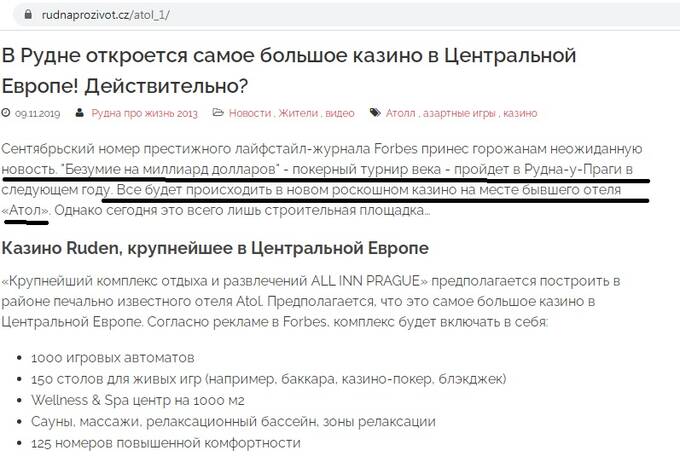 As local resource Rudná pro život wrote, “October 8, 2020, the poker tournament of the century will be held here – 88 million euros (more than 2 billion crowns) will be played in it, and the winner will receive a house for 50 million euros. The entry fee for the game should be 50,000 euros.” All this was supposed to take place on the site of the former Atol Hotel, where by October 2020 they promised to build the largest casino in Europe.

When asked by the press about what is happening in a town with a population of five thousand people, the mayor of Rudny said that “he knows nothing about what will happen here, but that he allegedly heard that Interpol is looking for the owner of this construction site.”

Actually, the scam with the poker tournament failed – no one, of course, built any casino, and no one played 88 million euros: 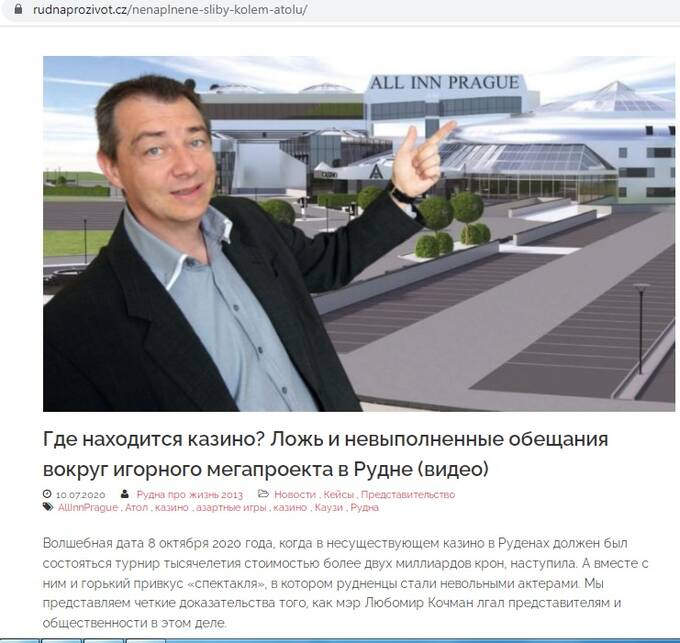 But in the course of the scandal, the name of Arman Akharonyan came up again. Who did not leave the Czech Republic after the failed assassination attempt on him and, apparently, after the organizers of the assassination fled to Armenia, significantly strengthened his position here.

It is Akharonyan who is called the initiator of this strange project. The investigation that followed the outbreak of the scandal revealed that “The owner of the building of the Atol Hotel, in which the All Inn Prague casino was going to cost, is NAM Property, whose partner and manager is Helen Aharonjan: 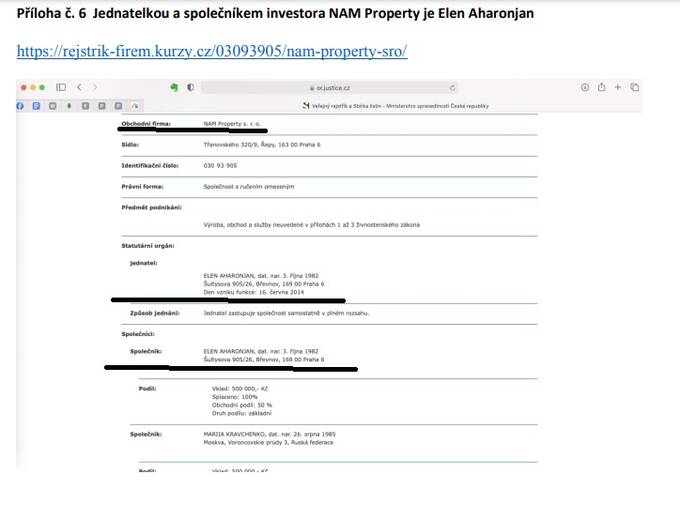 The report, compiled by members of the city council of Rudna, emphasized that “There is a clear connection between the All Inn Prague casino and international organized crime – the bearer of the same surname, Arman Akharonyan, was identified as the “head of the Armenian criminal world””: 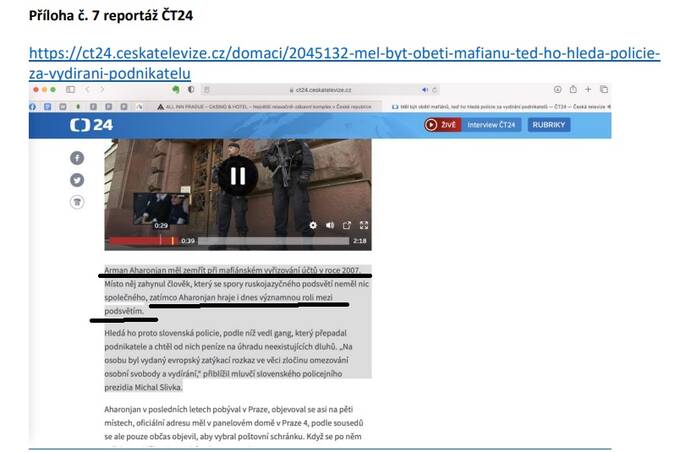 According to the same report, “Slovak police accused Akharonyan of blackmailing businessmen. An international arrest warrant has also been issued for him.” 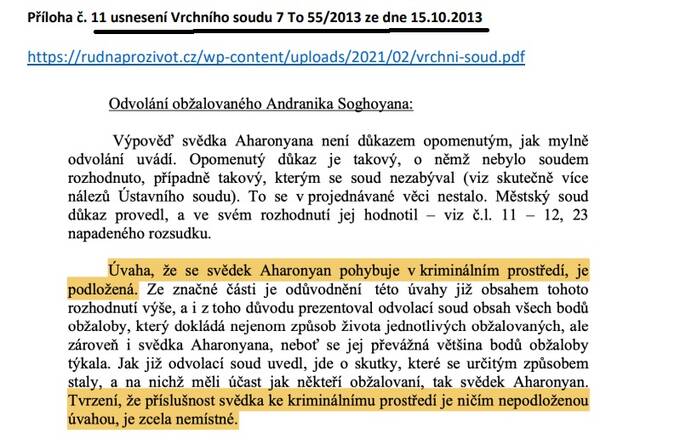 Thus, the result of the “construction of the century” in Rudna brought a somewhat unexpected result for Akharonyan – he again became the hero of the criminal chronicle. The project of a huge casino never took place, and the company that owns the hotel is in the process of liquidation.

However, almost two years have passed since then. And Armen Akharonyan again sank into obscurity – except for deaf rumors that he still continues to lead ethnic crime in the Czech Republic and Slovakia, almost nothing is known about him. Which, in the conditions of an open society in the twenties of the twenty-first century, raises even more questions than, in fact, the very activity of Akharonyan in the field of organized crime. Who takes care of him so competently and covers him from public attention? Combination “Kontroltugo”: Chemezov, Makhmudov and Yevtushenkov got into the “System” FSO Kreslavsky caved in at the PIK command

Alexander Govor: every miner can buy a McDonald’s